The Islamic Republic of Afghanistan has a population of approximately 32.2 million people (2018), and 14 ethnic groups (Pashtun, Tajik, Hazara, Uzbek, Baluch, Turkmen, Nuristani, Pamiri, Arab, Gujar, Brahui, Qizilbash, Aimaq, and Pashai). Pashto and Dari are Afghanistan’s official languages, while constitution stipulates that all other languages are “official” in the areas in which they are spoken by a majority of the population.
The political history of the modern state of Afghanistan began with the Hotak and Durrani dynasties in the 18th century. In the late 19th century, Afghanistan became a buffer state in the "Great Game" between British India and the Russian Empire. Its border with British India, the Durand Line, was formed in 1893 but it is not recognized by the Afghan government and it has led to strained relations with Pakistan since the latter's independence in 1947. Following the Third Anglo-Afghan War in 1919 the country was free of foreign influence, eventually becoming a monarchy under Amanullah Khan, until almost 50 years later when Zahir Shah was overthrown and a republic was established. In 1978, after a second coup Afghanistan first became a socialist state and then a Soviet protectorate. This evoked the Soviet–Afghan War in the 1980s against mujahideen rebels.

Why are people fleeing Afghanistan?

By 1996 most of Afghanistan was captured by the Islamic fundamentalist group the Taliban, who ruled as a totalitarian regime for over five years. Following the September 11 attacks, an intervention by the US and its allies forcibly removed the Taliban from power, and a new democratically-elected government was formed, but the Taliban still control a significant portion of the country.
The Taliban continue to use terror, including suicide attacks, to destabilise the country. They intimidate, threaten, kidnap and kill those who do not support them, have a different faith, or are too associated with the West. In Lancaster alone, there is a family who were threatened because the father worked for the United Nations, and a man who was stabbed because his construction company worked for NATO. A Sikh family had to pay the Taliban tens of thousands of dollars to have their child returned. More civilians were killed in the Afghan conflict last year than at any time since records have been kept, according to a United Nations report released on 24 Feb 2019 by the UN Assistance Mission in Afghanistan (UNAMA) and the UN Human Rights Office. In total, UNAMA documented 10,993 civilian casualties (3,804 deaths and 7,189 injured), representing a five per cent increase in overall civilian casualties and an 11 per cent increase in civilian deaths compared to 2017. The report documented 3,804 civilian deaths in 2018, among the dead were 927 children, the highest recorded number of boys and girls killed in the conflict during a single year. Head of UNAMA added, “This is the UN’s tenth annual report documenting the plight of civilians in the Afghan conflict –more than 32,000 civilians killed and around 60,000 injured in a decade. 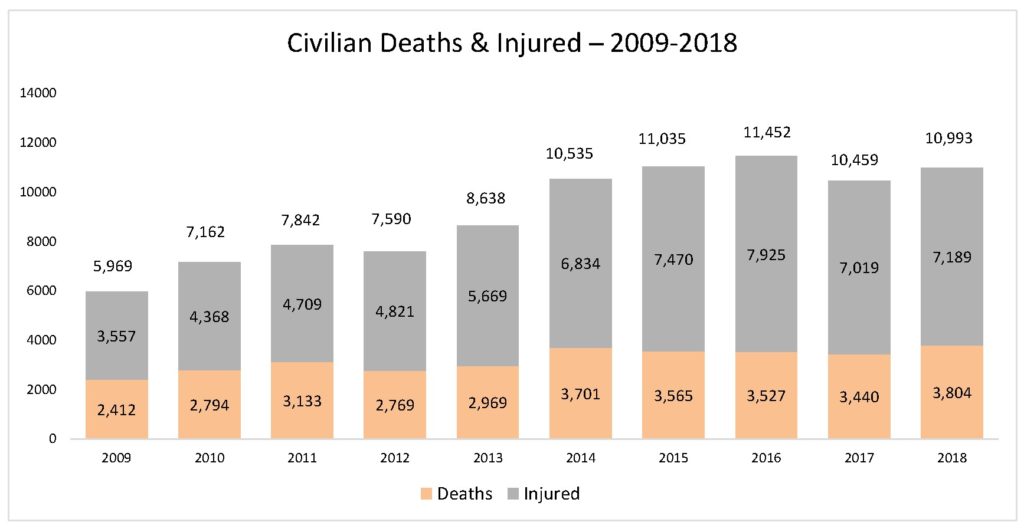 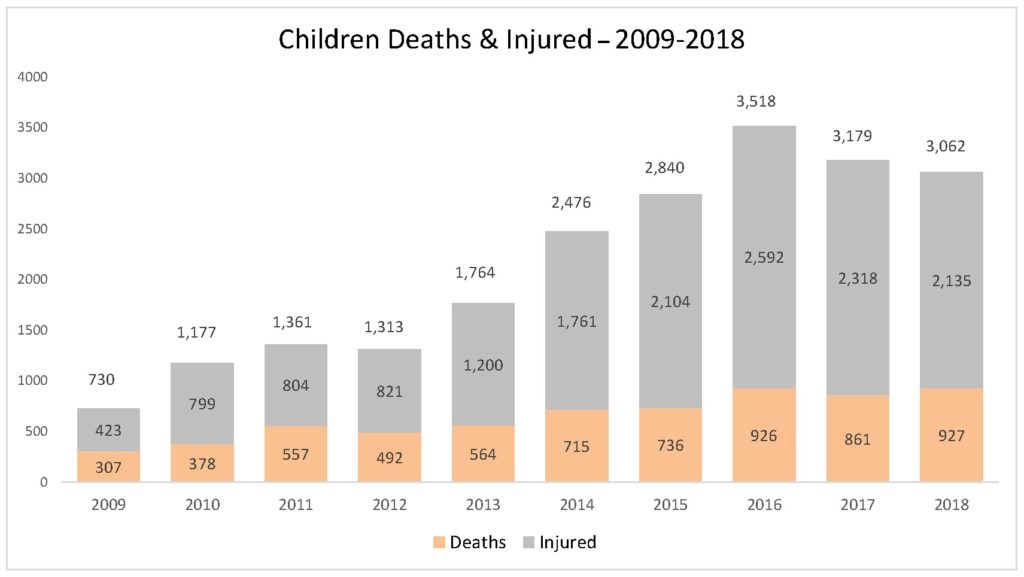